Granny annexe buildings come in all shapes and sizes. Functional living spaces can be created just as well in small gardens as large ones. This recent project in Esher by Ark Design Build is an excellent example of a small granny annexe in a smallish garden.

The bespoke design is 3.2m wide by 6.2m deep, creating a building of 19.84sqm. This is one of the smallest granny annexe buildings we have featured, but it is no less functional than its bigger counterparts and has been beautifully detailed.

The building has been designed as a family room that can double up as comfortable self-contained accommodation. Ark's clients' mother comes to stay for long periods, and the annexe offers her own space.

As part of their overall project, the Ark Design Build team handled the planning application on their clients' behalf and ensured that Building Control signed off the building. The Ark Design Build team handle all the works for the project, including the foundation system and the groundworks and connections to the mains services. This is important to consider when comparing companies to build your annexe - some companies will install the kitchen and shower room fittings, but leave you to organise the expensive connections to the services with another company.

As we can see from these photos, this is a contemporary granny annexe design. Ark Design Build are building up a portfolio of stylish contemporary garden annexes. 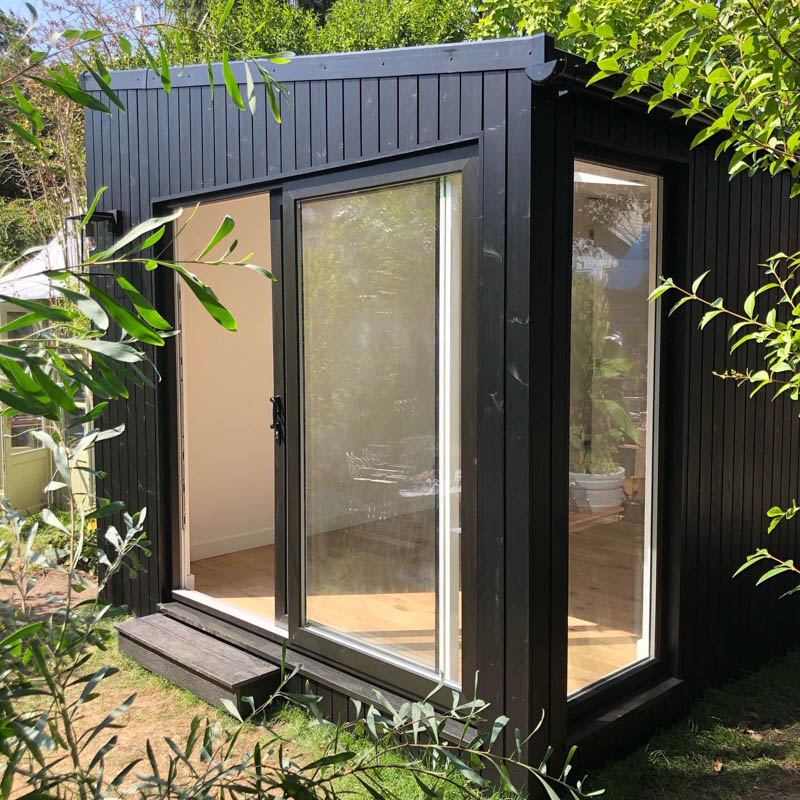 Unlike many of the granny annexe buildings we have featured, this one features a mono-pitched roofline. The tallest side of the building is 3m high. This extra height has created a main room with a wonderfully light and airy feel. This feeling is enhanced with the addition of a large roof window. A corner of glazing also ensures the main room is naturally light. A set of sliding doors has been mixed with a tall window on the side wall. Ark Design Build fit high-spec Aluminium doors and windows in their annexes. In this case, black powder-coated frames were chosen to match the black external cladding.

The large main room doubles up as living and sleeping accommodation. The room has a high-spec plastered and decorated finish coupled with a wood floor. An ensuite shower room has been fitted at the rear of the building. As we can see, the tiling has been beautifully detailed. An Ariston water heat has been fitted in the annexe for hot water on demand. As we mentioned earlier, the Ark team handled the connections for water, waste and electrics as part of their overall contract and had the works signed off by Building Control.

A small kitchenette has also been fitted in the annexe, again with beautifully detailed tiling. Chat with the Ark Design Build team on 07760 882 950 or send them an email: contact@arkdesignbuild.co.uk