Garden room designers will tell you that each customer approaches them with a wishlist of different design elements they want to incorporate. Typically these requests are in relation to the shape of the building, the doors, the cladding and the general layout. It seems though that the request to include a cat flap is becoming a thing too, at least with Sanctum Garden Studios customers!

This time last year, we wrote about a Sanctum Garden Studios project where the customer had asked for a cat flap to be incorporated into the garden design. Sanctum Garden Studios offer a bespoke design service on their Contemporary Range of garden rooms, so were happy to accommodate their customer’s unique request. 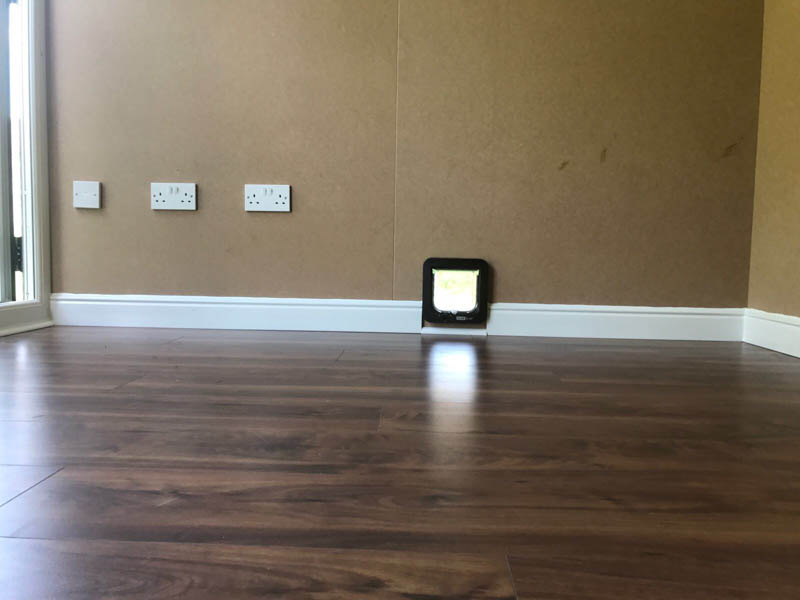 Having heard that Sanctum Garden Studios could incorporate a cat flap into a garden room, Michelle from Ormskirk chose them to build her new studio. Michelle opted for a Hampton Grey garden studio. This range is popular as it is one of the most cost-effective small garden rooms on the market. The thing is there is a limited number of options to customise the design or to incorporate unique design features.

However, the Sanctum Garden Studios team were happy to incorporate the cat flap into one of the solid side walls. They asked Michelle to source the cat flap, and she had it delivered to the Sanctum workshops so that it could be fitted before the building arrived on-site for assembly. The Hampton Grey can typically be installed in just a day. Prices for this range start at £5,495. If you are thinking of incorporating access for your cats into your garden room design, talk to the team at Sanctum Garden Studios – they are making a name for themselves with this design feature! Give them a call on 01275 279 161 or take a look at their website.