Sometimes a garden office project goes wrong. Fortunately, it is not something we often hear, but there are projects that don’t end up being the quality described. Swift Garden Rooms recently came to the rescue on a garden room project that had not lived up to expectations.

At this point, Steve chose to work with Swift Garden Rooms. Swift are bespoke garden room designers who are known for their high-end finish and attention to detail. Rather than replicate the original design, the Swift designers approached the project as they would any new commission. This started by asking Steve two key questions:

Steve wanted to create a high-spec workshop style building, a man-cave if you like. A fairly simple building was created. Sitting on a footprint of 5.5 meters by 3 meters. The key feature of the design are four slim floor to ceiling windows on the front elevation. The access door to the room has been fitted on a side wall. Focusing just windows on the front wall like this, enhances the simplicity of the design.

A further window have been fitted in the rear wall. This time a rectangular opening window has been fitted high in the wall. This window lets in extra light and will be easy to open when ventilation is needed. 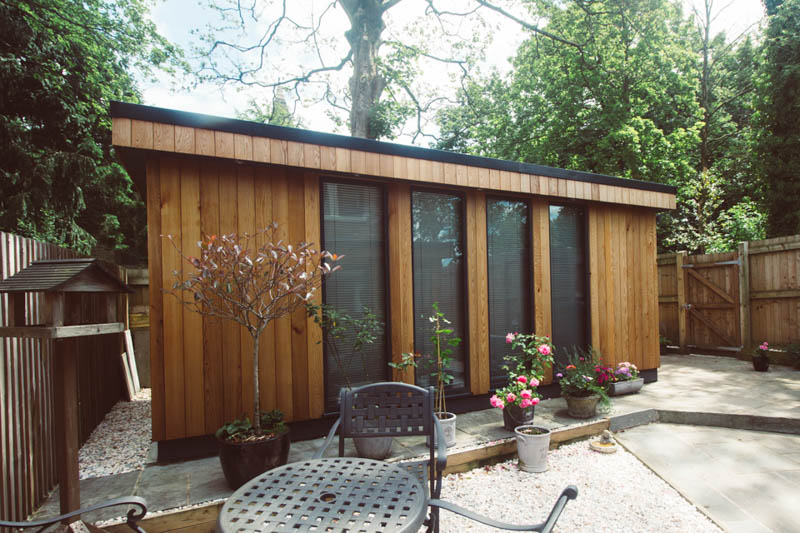 The grey window frames and roof trims create a great contrast against the mellow tones of the Western Red Cedar cladding. The tongue & groove cladding has been fixed vertically, a design detail that accentuates the clean lines of the building.

Moving inside, the workshop has been plastered and decorated like a room in a new house. This finish coupled with the laminate wooden floor has created a light, modern interior. 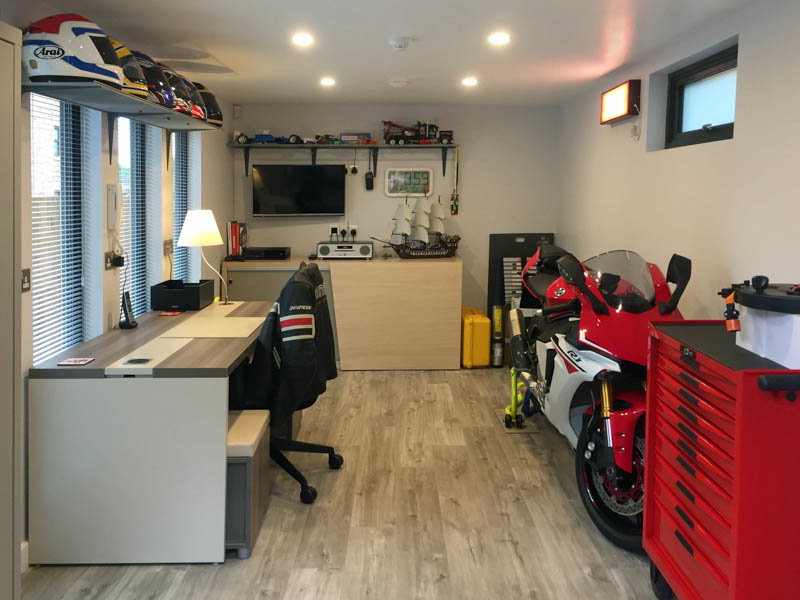 Steve owns a business specialising in alarm systems, so his man-cave is kitted out with the latest security systems.

The garden room was built under the Permitted Development rules and completed in 2 weeks. A similar building would cost £28,500 including VAT.

Steve is delighted with his building from Swift Garden Rooms, so much so he went on to commission them to design a contemporary extension to his house. The Swift team are delighted to have restored his faith in the garden room industry.

To learn more about creating a high-spec garden room, talk to the Swift team on 01625 875 588 or send them an email. Explore www.swiftorg.co.uk to see more of their garden room projects.