A recent report by Aviva shows that the number of people living in multi generational households is growing, and will continue to grow. Because of high house prices more and more 21 to 34 year olds are moving back in with their parents in an attempt to save money for a home of their own.

Moving back home can be seen as a negative move by some people, but the report states that 66% of the people surveyed felt the benefits of living together far outweighed the disadvantages.

One of the best solutions when moving back home with your parents is to create a self contained annexe in the garden. This is a relatively quick process and a cost effective one too. One bedroom garden annexes with kitchen and shower room start at around £35,000 and can be the perfect solution to multi generational living. Making full use of your parents home, yet maintaining independent living for all of you.

You don’t have to have a huge garden to build a garden annexe, there are some clever designers who can maximise the smallest of footprints. Your supplier will then handle the build process for you so that you can move straight into your new home.

We have featured some great garden annexes recently, here are just a few:

Green Studios built this annexe for a artist who was looking to downsize, so decided to build a new home in her parents garden. Read more about the project here: Garden Spaces have launched a new stream to their business just focusing on building garden annexes called Annexe Spaces. They have created a great website looking at their range of  homes in the garden. Read more about it here: 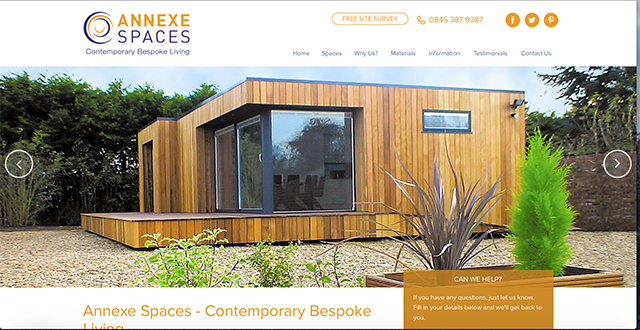 By contrast this SIPS Garden Rooms annexe is quite large at 90sqm. This annexe is a fine example of a contemporary style garden annexe. Read more about this project here: Booths Garden Studios have built lots of garden annexe buildings for relatives young and old. Actually Booths have quite an insight into annexe design, with owner Alex Booth having one in his own garden for a relative. Take a look at this Dad Pad example: There are several other suppliers who build garden annexes, check out our Suppliers Directory to find suppliers who build them in your area – just select Granny Annexe / Micro Homes and the area of the UK you live from the drop downs and hit Search.