Over the last few months, we have been teasing details of Booths Garden Studios new garden annexe design that can provide a self-contained home for a family member. Well, it will officially go on sale on 1 July 2018.

One of the big pluses of the new QCB Garden Annexe is that it can be built without planning permission. Designed to comply with the Caravan Act, it can be used as a home for a family member without the normal rigmarole of a planning application. This saves a considerable amount of time and expense. It also means that the QBC Garden Annexe can be installed quickly, lead times being a matter of weeks and on-site installation completed in a couple of days. The QCB Garden Annexe is a standard size, with an internal footprint of 20ft x 8ft | 6.1m x 2.4m. The accommodation comprises a living/sleeping area, kitchenette with room for a table and chairs and a shower room. As it stands, the annexe is ideal for one person to live independently. If more space is required, for instance, to create a separate bedroom. The Booths team tell us that a second unit can be attached to create an L-shaped annexe. Interestingly, this second building can be added at the time of order, or anytime in the future; such is the way the Booths team have designed the annexe. This type of annexe is often referred to as a granny annexe, but the QCB Garden Annexe can be used by a family member, young or old. Many families are choosing to install an annexe like this for a teenage child or for a child returning from university, looking to consolidate money.

Kitchen and shower room included in the garden annexe package

The QCB Garden Annexe comes complete with a modern fitted kitchen and shower room. The interior of the annexe does not require decorating, and the flooring is already laid. All you have to do is to move in your furniture. Booths Garden Studios are offering the QCB Garden Annexe for £24,995 including delivery within 100 miles of Booths HQ (PE8 5AS). This is a launch offer which will probably go up in the coming months, so act quickly to secure the best deal! On top of the building cost, you will also need to factor in the groundworks and connections to the mains services. Booths Garden Studios can quote you for this work as part of a turnkey service, but they are quite transparent, and in fact, suggest you also get a quote from a local company for this work. Every situation is different, so a site survey will be needed before a firm quote for this aspect of the job. 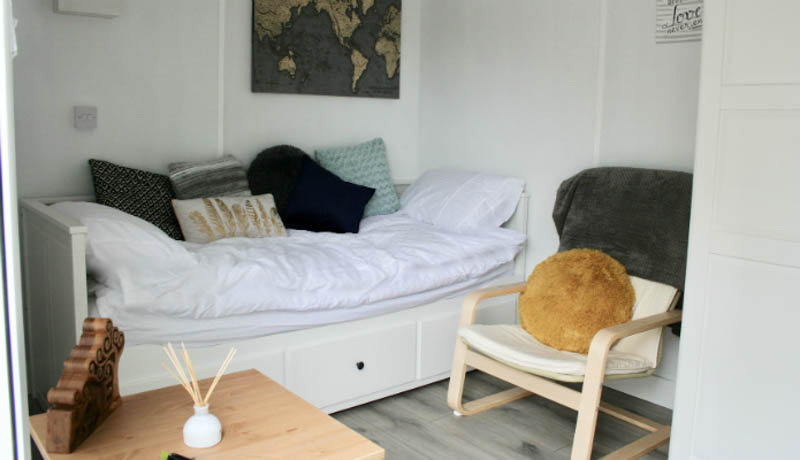 You don’t need to worry about the additional cost of foundations for the annexe as they are included as part of QCB Garden Annexe cost. Booths Garden Studios have developed an adjustable foundation system which can overcome any site irregularities.

Because the QCB Garden Annexe is a temporary, portable building that can be lifted out of your garden by crane, it has a resale value. This is good to know should your situation change. Booths Garden Studios have experience of the resale market for their buildings and estimate that you could recover at least half the initial cost at resale.

Booths Garden Studios have created four pages on their website which look at the QCB Garden Annexe, here are the links:

To learn more about the QCB Garden Annexe talk to the Booths team on 07590 067 120 or send them an email. Take a look at www.boothsgardenstudios.co.uk to see more of their work.