This contemporary yoga studio in a London garden is a fine example of bespoke garden room design, showcasing how the design of the building and choice of design features can be tailored to the specific needs and tastes of the client. eDEN Garden Rooms were approached by their client who was looking to create a luxury studio in her garden for her yoga business. After researching the market, the customer opted to work with eDEN Garden Rooms as they were able to design a building that made full use of the plot available. The boundary lines of the property were not at right angles to each other, and if a standard rectangular garden room were built, there would be an unserviceable void behind the building. As bespoke designers, eDEN Garden Rooms design each of their buildings around the client’s design brief so created an irregular shaped room that followed the lines of the boundaries. Looking at the completed building from the front, you would never know that it was an irregular shape, as everything looks perfectly ‘square’, this is a testament to good design. The large deck area at the front of the building has also been designed around the site, in this case, an established tree. When designing around trees, considerable thought needs to be given to the location of the roots in relation to the foundations and leaving enough room between the structure and the tree so that the tree has room to grow.

The building is a substantial 7870mm wide x 3801mm at its deepest point and 3400mm at its narrowest. The building has been divided into two sperate rooms each accessed by their own doors. The main room has created a light and airy yoga studio while the smaller area has been created to house the families bikes and gardening equipment. 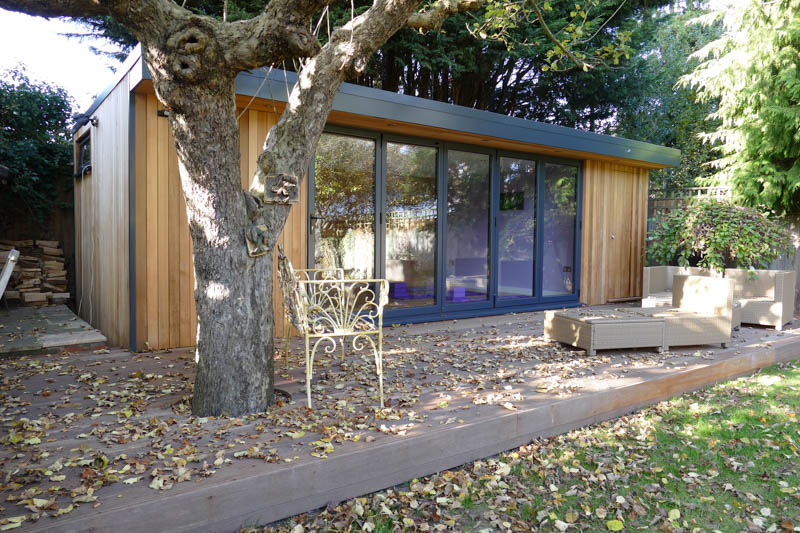 A 5-leaf set of bi-fold doors has been fitted on the front elevation which floods the room with natural light. They will fold right back to allow yoga classes to spill out onto the deck on sunny days.

The exterior of the building has been clad in Western Red Cedar. This same material has also been used internally to create a feature wall. This is a feature we have seen used a few times over the last couple of years, and it looks fantastic! As well as the visual effect it creates it also offers a tactile texture to the interior and a gentle, sweet aroma. As you can see, a bespoke design approach has created a garden room that is tailored to its site, making full use of every inch of space available. Together the eDEN team and their client have created a beautiful, luxurious yoga studio.

To learn more about eDEN Garden Rooms work take a look at their website or give them a call on 0800 0835 339 to discuss your options.