Over the years we have seen garden rooms be extended with small pods on the side or rear to be used as a cloakroom and existing buildings be replaced with a larger model, but we haven’t seen a garden room significantly extended in size, although it is perfectly possible. We were therefore intrigued to see a project that Sanctum Garden Studios have recently completed.

Five years ago Sanctum Garden Studios built a 4.2m x 3m garden room for a family in Wimbledon. The building has been used as a multifunction home office and gym. The family have been delighted with their garden room and wanted to increase additional space for their children to enjoy the space too. 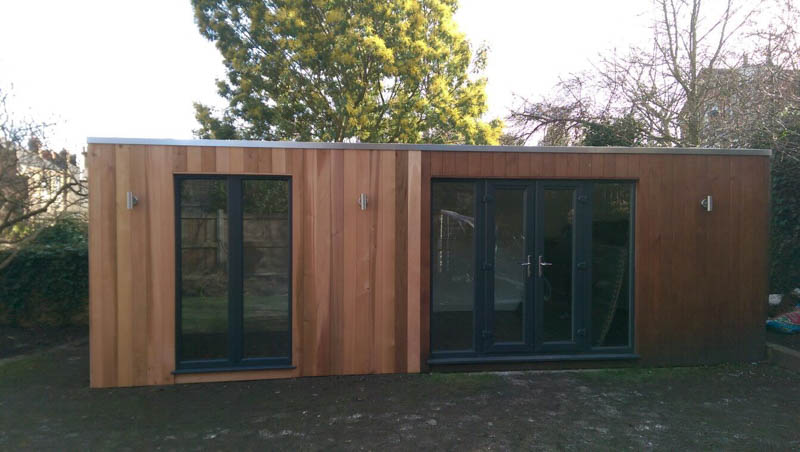 The family approached Sanctum Garden Studios about their options for extending the size of their garden room. The easy option would have been to create a second studio alongside the original one and cut a hole for a communicating door. The customers, however, wanted to create one open plan room.

The Sanctum team therefore went to the lengths of removing one existing side wall and building a second three sided 3m x 3m garden room alongside. The two structures butting together seemlessly. Considerable thought will have been given to the effects this would have had one the core structure and the various load points. The original garden room was clad in Western Red Cedar which the customers applied a UV protector too, to maintain its colour. The extension also was finished in Cedar and this too will have the UV protection applied. The photos were taken before this took place, but once applied the building should have an even colouring.

The interior was plastered and decorated creating a light and airy room that has extended the families living space. To learn more about this project talk to Sanctum Garden Studios on 01275 279 161 or visit their website to explore their work further.

Take a look at some other Sanctum Garden Studios we have featured: